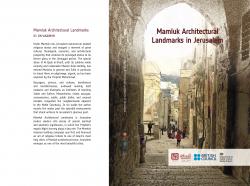 Under Mamluk rule, Jerusalem assumed an exalted religious status and enjoyed a moment of great cultural, theological, economic, and architectural prosperity that restored its privileged status to its former glory in the Umayyad period. The special allure of Al-Quds al-Sharif, with its sublime noble serenity and inalienable Muslim Arab identity, has enticed Muslims in general and Sufis in particular to travel there on pilgrimage, ziyarat, as has been enjoined by the Prophet Mohammad.

Dowagers, princes, and sultans, benefactors and benefactresses, endowed lavishly built madares and khanqahs as institutes of teaching Islam and Sufism. Mausoleums, ribats, zawiyas, caravansaries, sabils, public baths, and covered markets congested the neighborhoods adjacent to the Noble Sanctuary. In six walks the author escorts the reader past the splendid endowments that stand witness to Jerusalem’s glorious past.

Mamluk Architectural Landmarks in Jerusalem invites readers into places of special spiritual and aesthetic significance, in which the Prophet’s mystic Night Journey plays a key role. The Mamluk massive building campaign was first and foremost an act of religious tribute to one of Islam’s most holy cities. A Mamluk architectural trove, Jerusalem emerges as one of the most beautiful cities.