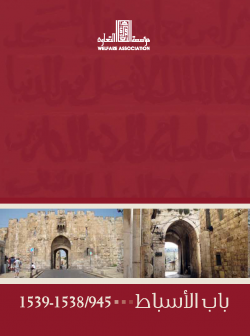 Bab al-Asbat has a large eastern façade that reveals a number of distinguishing traits and characteristics specific to military architecture. This style predominated in the AH 10th / AD 16th century and is associated with the School of Ottoman architecture, along with the retention of some traditions pertinent to Mamluk architecture.

The façade was constructed from stones of immense size especially in the lower courses. In a recess in the middle of the façade there is a rectangular portal, above which is a mortar arch. Above the arch there is a rectangular stone plaque which might have been designed as a decorative element. On each side of the plaque, and above it in the middle, there is a projecting circular panel that resembles a medallion. The entrance opening is crowned by a pointed arch. On either side of the arch there is a stone carving in relief of a pair of lions, which represent the blazon of the Mamluk Sultan al-Zahir Baybars (r. AH 658–76 / AD 1260–77). The gate was therefore assigned the name Bab al-Asbat (Lion's Gate). The gate structure dates to the placement of the carved lions, and although their presence within the architectural fabric of the walls is linked to a number of popular tales, the veracity of these cannot be confirmed with any certainty. Directly on the outer edge of each of the two pairs of lions there is a projecting circular panel decorated with vegetal ornamentation. Above and below this panel there are embrasures for shooting arrows which were also utilised as look-outs, the two upper ones end with a circular medallion, devoid of decoration. Two courses away from the keystone of the pointed arch there is a small observation balcony. This is held up by a bracket with four supports, and covered by a gabled roof. On either side of the balcony there is a window, the top of which terminates in a small tapered and lobed arch. At the top of the façade there are a series of rectangular balconies.
The entrance to Bab al-Asbat leads to a vestibule with a square floor plan and a ceiling with a fan-shaped vault. The entrance is typical of military architecture as, in an attempt to impede the progress of the enemy, the vestibule is elbow-shaped, whereby on entering it the visitor is forced to go north instead of moving straight in a westward direction. In the period of the British Mandate the western wall of the entrance was removed, allowing direct entry without the northward bend. The vestibule opens on the south and west sides with a tapered arch. Mounted above the southern arch there is a rectangular stone panel upon which there is an inscription in Ottoman naskhi script. The inscription indicates that the order to build the gate was given in AH 954 (AD 1538–9) by Sultan Sulayman the Magnificent.